Harvard is No. 1 for second year in a row.
Stanford notches its highest Businessweek rank at No. 2. Duke is No. 3

NEW YORK — Bloomberg Businessweek today released its 2016 ranking of the best U.S. business schools, based on data compiled from more than 1,000 recruiters, 15,000 alumni, and 9,000 recent graduates. Harvard claims the number one spot among 87 full-time U.S. MBA programs. Stanford is number two, and Duke (Fuqua) is number three. This is the second year in a row that Harvard Business School came out on top—and this time by a wider margin. HBS was rated No. 1 by the more than 1,000 corporate recruiters, and No. 3 among alumni. Its graduates left with the second highest salaries. Competition for the No. 2 spot was particularly close this year, with Stanford Graduate School of Business edging out Duke University’s Fuqua School of Business by .08 percentage point for its highest ever Businessweek rank.

“More graduate degrees in business are awarded annually than in any other field in the U.S., and new business schools are accredited by the dozen every year,” said Ellen Pollock, editor, Bloomberg Businessweek. “Our annual ranking of full-time U.S. MBA programs is an invaluable tool for those looking to stand out in the job market. This year we continue our focus on how well the schools channel their graduates into good jobs and, with a new survey of MBAs after graduation, offer more detailed insight into what grads can expect from their careers.” 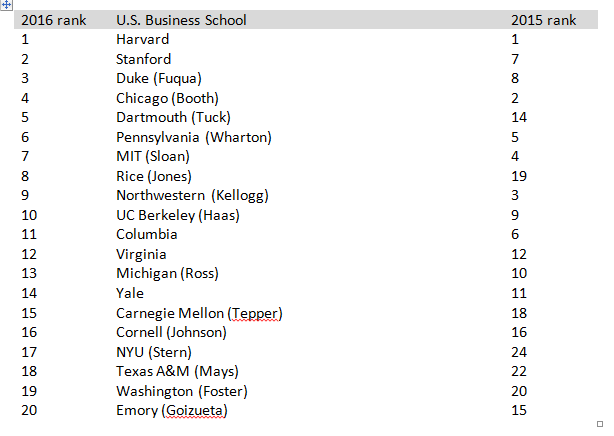 – Harvard had more than a nine point lead on its nearest competitor this year, up from less than two points in 2015.
– Indiana University received the highest score among recent graduates.
– Rutgers University’s 2015 grads had the highest job placement rate.
– The University of Michigan does not appear in the top ten for the first time since Businessweek started the rankings in 1988.
– This is the first year that Rice University has ranked in the top ten.
– Alumni, recent graduates and recruiters all gave the University of Texas at Dallas better scores, helping to propel it 13 spots.

The Real Cost of an MBA

For the first time, Bloomberg Businessweek created a “real” cost figure for attending some of the top full-time MBA programs. Stanford Graduate School of Business had the highest full-freight cost, nearly $435,000, because those in its MBA program earned more at the time they enrolled. University of Pennsylvania (Wharton) came in at $391k, followed by Harvard at $384k, Columbia at $379k, and U. Chicago at ($371k).

To calculate, Bloomberg Businessweek used two years of wages even though students don’t always forgo work for exactly 24 months and might do an internship during the summer break. Similarly, we calculated cost of tuition by taking the 2016-17 cost-of-attendance and multiplied it by two. For public universities, we entered the cost for nonresident students. We didn’t try to factor in financial aid (for example, more than half of Harvard students receive aid). Schools also compile their cost of attendance subjectively, so it is recommended that readers use this figure to get a general sense of how much an MBA can cost at these institutions. Only schools that provided a cost-of-attendance figure were included. The forgone wages are larger than the reported cost (housing, health insurance, tuition) at the majority of programs we ranked.

“Unlike undergraduate students who are often giving up low-paying jobs to return to school, MBA students are typically in their late 20s or early 30s and leaving well-paid positions. That makes calculating the opportunity cost even more significant for MBA seekers,” said Lance Lambert, Bloomberg Businessweek’s business school rankings coordinator.

Bloomberg Businessweek’s ranking of full-time MBA programs is based on five components: (1) employer survey (35 percent of total score), in which more than a 1,000 recruiters named the programs that best deliver the skills they seek in MBA hires; (2) alumni survey (30 percent), in which around 15,000 graduates from the classes of 2008, 2009 and 2010 told us how their MBAs affected their careers, their compensation over time, and their job satisfaction; (3) student survey (15 percent), in which 2015 graduates (9,119 responses) and 2016 graduates (9,332 responses) rated their programs; (4) job placement rate (10 percent), or how many MBAs seeking full-time jobs get them within three months of graduation; (5) starting salary (10 percent), or how much new MBAs make in their first jobs, adjusted for industry and regional variation. For more on the methodology and the rankings for all 87 U.S. B-schools, go to bloomberg.com/bestbschools2016.

The top 30 full-time U.S. MBA programs will be highlighted in the print issue of Bloomberg Businessweek on newsstands Friday, November 18, 2016.