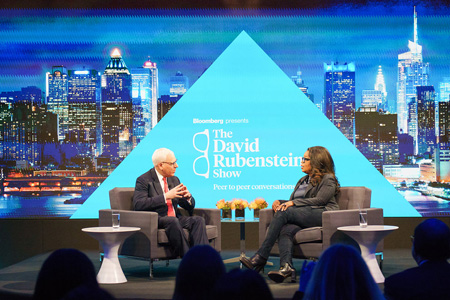 The first episode of the season featuring Oprah Winfrey debuted as a digital video on Bloomberg.com this morning and airs on Bloomberg Television this evening at 9 p.m. ET. The hour-long episode will re-air multiple times over the next two weeks. New episodes in the series will be half-hour and debut every two weeks, with the Coach K interview debuting on Wednesday, March 15, at the start of March Madness. Episodes can also be viewed on Bloomberg.com, YouTube, and the Bloomberg terminal.

David M. Rubenstein is the co-founder and co-CEO of The Carlyle Group, a global alternative asset manager. A graduate of Duke and the University of Chicago Law School, he is chairman of the board of trustees of the John F. Kennedy Center for the Performing Arts, regent of the Smithsonian Institution, president of the Economic Club of Washington, D.C., and a “patriotic philanthropist” who has loaned his copies of artifacts such as the Magna Carta, Declaration of Independence, and Emancipation Proclamation to national museums. He also helped fund repairs to the Washington Monument.

“Not only is David one of America’s most accomplished business leaders and philanthropic citizens,” said Bloomberg Media CEO Justin B. Smith, “he is also a gifted interviewer, whose fascination with getting at what makes people tick comes through compellingly on camera. We were thrilled with the positive response to the first season of ‘The David Rubenstein Show,’ and are very glad David is back.” He added, “’The David Rubenstein Show’ is an important part of Bloomberg’s original television and video strategy: Creating high-quality and diverse content for business executives paired with global reach across multiple distribution platforms and experiences.”

David Rubenstein said, “It’s been a great joy and opportunity to help viewers better understand and appreciate some of the most interesting minds and leaders alive today. All of my guests are highly accomplished, but it is their wisdom and humanity that is so intriguing to people.”

The premiere episode of “The David Rubenstein Show: Peer-to-Peer Conversations” second season features Rubenstein sitting down with Oprah Winfrey in front of a live audience in New York. Winfrey candidly discusses her childhood, the career setbacks and milestones that defined her resolve, why she believes “The Oprah Winfrey Show” was such a huge success—and what she misses most about it, and the work that brings her the most joy now. Taped after Donald Trump’s election as President, Winfrey also addresses if she’d consider running for the presidency.

For more on the series, including full episodes and clips, please visit bloomberg.com/peertopeer. Follow the conversation on Twitter by tagging @business. Bloomberg Television’s Matthew Saal is the executive producer and Seth Karten is the editor.

Bloomberg Television is available in more than 437 million homes worldwide in 70+ countries and reaches the world’s most affluent and influential viewers. The 325,000 terminal subscribers are able to stream Bloomberg TV live directly on their terminals. Bloomberg TV is also streamed on Bloomberg.com and other mobile properties including Apple TV, Amazon Fire TV, Roku, Samsung TV and Chromecast. Bloomberg is consistently one of the top three providers of global business video, ahead of other major financial networks. In November 2016, Bloomberg had 22.5 million unique viewers worldwide.

About Bloomberg
Bloomberg, the global business and financial information and news leader, gives influential decision-makers a critical edge by connecting them to a dynamic network of information, people, and ideas. The company’s strength – delivering data, news, and analytics through innovative technology quickly and accurately – is at the core of the Bloomberg Professional service, which provides real-time financial information to approximately 325,000 subscribers globally. For more information, visit bloomberg.com or request a demo.