Abu Dhabi –- Bloomberg today announced the expansion of its media offering in the Middle East with a suite of new, regionally-focused editorial platforms to serve the growing audience of business and financial news consumers based, or interested in the region as an agent of global markets.

Combining the resources of Bloomberg’s 80-strong Middle East editorial team and new senior talent with deep local expertise, the expanded offering will give business and financial professionals deeper access to the region’s newsmakers and market-moving news via a variety of new platforms. These include: a dedicated digital destination, original television programming, a new television studio and a major new conference convening the Middle East’s most influential leaders in business and finance.

Riad Hamade, Managing Editor, Middle East and North Africa said: “Bloomberg’s latest regional editorial products build on more than 20 years of newsgathering across the Arab World to introduce new platforms for storytelling on the companies, markets, economies and politics shaping the Middle East. Adding new media platforms will allow us to deliver more relevant stories to our growing audience of business and financial professionals across the region.”

“Today’s announcement is a significant milestone in our evolution towards a global, digital-first, multi-platform media brand,” said Justin B. Smith. “In the last year, we have launched regional sites in EMEA and Asia, entered into an ambitious multi-platform partnership in India and now are expanding our reach to important business and finance audiences in the Middle East through investing in platforms, people and technology.” 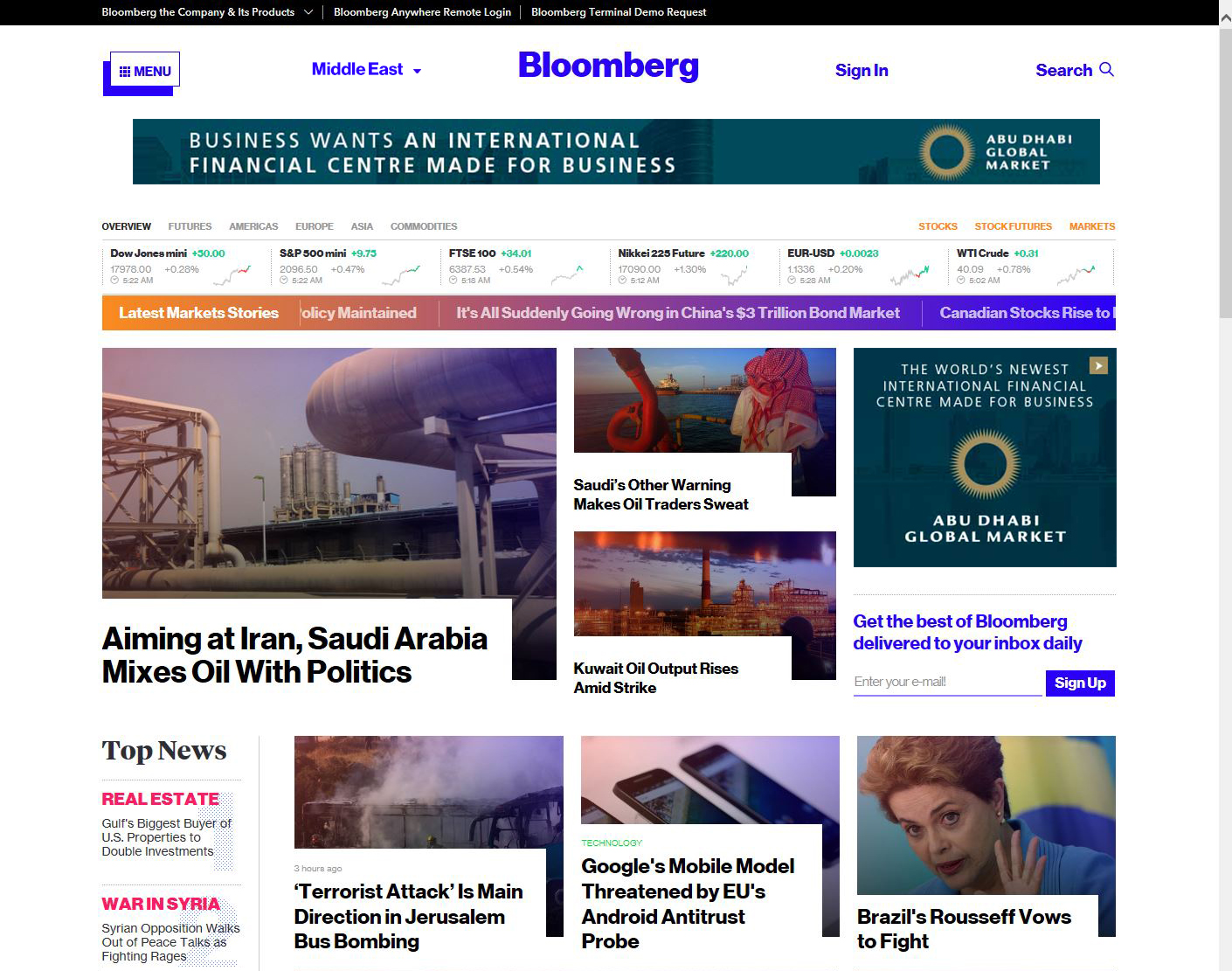 At the heart of this localisation strategy sits a dedicated Middle East edition of flagship digital destination Bloomberg.com. Unveiled today, Bloomberg.com/MiddleEast will dedicate expertise to themes of global significance but appealing particularly to readers across the Middle East.

Bloomberg Television will significantly expand its Middle East footprint with a new, Dubai-based studio and production crew, and original live programming from the region, including regular live bulletins from Abu Dhabi, to air from early May.

A new, prime-time morning show – Bloomberg Markets: Middle East – will focus on the cross-section between the region’s politics, markets, economies and companies, airing at 8am UAE Sundays through Thursdays.

This year, Bloomberg will partner with Abu Dhabi Global Market to bring the Bloomberg Markets Most Influential Summit to the Middle East for the first time.

The Bloomberg Markets Most Influential Summit is an annual conference franchise at the centre of a multi-platform editorial initiative that leverages Bloomberg’s unparalleled breadth of media resources, including print, digital, television and radio platforms, to deliver one-of-a-kind conversations with newsmakers and financial leaders on the trends and opportunities shaping the global economy.

Bloomberg Markets Most Influential Abu Dhabi will convene the leaders and innovators who are moving markets, driving economies and making deals that shape the future of finance in the Middle East and beyond. Abu Dhabi joins New York, London and Hong Kong as the latest financial center to host this premium event.