“DAMN. WHAT AN UGLY ELECTION. THAT’S WHAT EVERYBODY’S THINKING.”

BLOOMBERG BUSINESSWEEK RELEASES THE ELECTORATE ISSUE,
TURNING TO DATA “TO FIGURE OUT HOW IN THE WORLD WE GOT HERE”
AND “JUST HOW DIVIDED WE’VE BECOME” 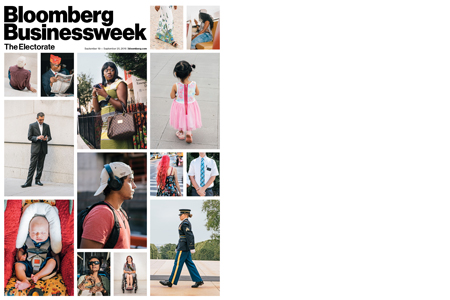 NEW YORK (Thursday, September 15, 2016)—Today, Bloomberg Businessweek released The Electorate, a special issue devoted to American voters—their anxieties, their frustrations, and their hopes. In the final months before this unprecedented presidential election, Businessweek turned to reams of data and traveled from Tukwila, Wash. to Albertville, Ala. to talk to CEOs and pastors, DJs and doctors, funeral directors and daycare workers, about employment, education, immigration, healthcare, childcare, racial divisions, political gridlock, and more. In trying to explain how we’ve become so divided,Businessweek ultimately realized that Americans aren’t as split as their parties, and “all want the same thing: the freedom and security to pursue possibility.”

The Electorate issue categorizes Americans using five common divisions: Red state or blue state; old or young; rich or not-rich; white or minority; and male or female. Then, the divisions are rearranged in every possible combination, showing 242 different Americas—each represented once in the pages of this issue, through data, photographs, and interviews.

The full Electorate issue 2016, which hits newsstands on Friday, September 16, 2016, can be found online at: http://buswk.co/electorateissue

• America divided: According to the U.S. Census, the biggest group in America is blue state, young, not-rich, white women—42.8 million people. By contrast, there are only 43,847 red state, old, rich, minority men in the whole country.

• The richest and poorest places in America both vote for Democrats: The wealthiest place in the U.S. is Falls Church, Va., where more people backed Hillary Clinton in the primary than voted for all the Republicans together. The highest concentration of poverty is in Oglala Lakota County, S.D. In 2012, 93 percent of voters there chose President Obama.

• What defines the middle class? Sam Grobart interviewed shoppers at the Mall of America and found that people think they are middle-class, whether they make $22k or $200k.

• Working parents are overwhelmed by child care: In the U.S. the happiness gap between parents and adults without children is worse than in 21 other developed countries, primarily due to the high cost of child care and limited paid leave.

• Corruption is America’s most shared fear—and Obamacare scares more people than a nuclear attack: 75 percent of Americans think their political parties are corrupt. Obamacare ranks 13 on a list of 50 shared fears. Fear of illegal immigration is ranked at 23, lower than a fear of tornadoes.

• Cities are getting more Hispanic: The U.S. Hispanic population grew 150 percent from 1990 to 2014, to 56.6 million, making it three times as large as the second-fastest-growing group: Asians.

• Americans abroad can’t stop talking about the election, either: In 2012, 278,212 civilians voted from overseas. A third of those votes were cast in California, Florida, and New York.

FEATURES FROM THE ELECTORATE ISSUE:

OHIO’S MOST PARTISAN DISTRICTS: NOT ABOUT THE LESSER OF TWO EVILS by Joshua Green
Joshua Green reports from the swing state of Ohio where Bloomberg Businessweek teamed up with the data science firm Optimus to identify the most pro-Trump and pro-Clinton districts in Ohio during the presidential primaries. These two districts, 75 miles apart, have many differences, most obviously in their racial composition. And indeed, deep veins of animosity toward the opposing candidate run in both places. But the citizens of southeast Cleveland, where Clinton’s Democratic support runs deepest (74% of citizens are for HRC), and those in the Rust Belt haven of Youngstown, whose Republicans, many newly minted, ardently favor Trump, didn’t see politics as being about the other side. It was about them. And both conveyed a surprising, prevailing sense of cautious optimism about their future and candidate.

MARK CUBAN: A BILLIONAIRE CHANGES HIS MIND by Ira Boudway
After Donald Trump announced his candidacy in 2015, Mark Cuban—the billionaire NBA team owner and “Shark Tank” star—called him “probably the best thing to happen to politics in a long, long time.” A year later, Cuban endorsed Hillary Clinton at a rally, asking: “Is there any bigger jagoff in the world than Donald Trump?” Ira Boudway exchanged e-mails with Cuban about why he switched sides.

MILO YIANNOPOULOS: A NEW FORCE IN ELECTORAL POLITICS by Joel Stein
Milo Yiannopoulos is the 31-year-old British star writer for Breitbart News, where he’s the loudest defender of the new, Trump-led ultraconservatism, shouting to stop immigrants, feminists, political correctness, and any non-Western culture. He’s a wildly effective—and offensive—troll who has become the pretty, monstrous face of the alt-right. Yiannopoulos tells Joel Stein in London, “I think my legacy might be longer than Trump’s. I’m attacking the disease, not the symptoms. Also, he doesn’t read. But I still love him. And he’s still my daddy. Nobody’s perfect.”

IMMIGRANTS WITHOUT PERMANENT STATUS HAVE THE MOST AT STAKE IN THIS ELECTION by Valeria Fernandez and Michael Friberg
After the U.S. Senate failed to pass immigration reform in 2012, President Obama signed an executive order creating the Deferred Action for Childhood Arrivals program. It shields young people who arrived in the U.S. before June 2007 from deportation and allows them to apply for work permits legally. Businessweek interviews 16 of them in Phoenix.

TUKWILA, WASH., HAS BECOME A HAVEN FOR REFUGEES by Karen Weise
After the 1990s tech boom drove up housing costs in Seattle, refugee resettlement agencies began placing immigrants in the neighboring city of Tukwila. The suburb had 834 foreign-born residents in 1990, according to U.S. census figures. Today almost 8,000 residents—about 40 percent of Tukwila’s population—are foreign-born. Here are some of their stories of survival.

EVEN IN DIVERSE SCHOOLS, BLACK STUDENTS DON’T GET AN EQUAL EDUCATION by Susan Berfield
Even in Evanston, Ill., where maintaining a diverse student body is paramount, evidence shows that the school system educates white students more successfully than students of color, regardless of their household income. Similar communities also undereducate students of color.

THE ANGER WON’T END ON NOV. 8 by Drake Bennett
The presidential race has been an unprecedented opportunity to savor the variety of negative emotions. Drake Bennett examines two of the contest’s prevailing sentiments: fear and anger. If Trump loses, the tens of millions of supporters whose anger he channeled aren’t going to be predisposed to take stock and reexamine their beliefs. They’re not going to be interested in olive branches or compromise, and they’re not going to have any patience for politicians who are. They’re not going to think anything has been decided. That’s how anger works. And it’s something we should all fear.

WHERE IS THE HOPE?
As important as the election on Nov. 8 is, what matters more is what happens on Nov. 9 and afterward. The hope comes from this: As different as they are, Americans all want to pursue possibility.

ABOUT BLOOMBERG BUSINESSWEEK:
Bloomberg Businessweek offers a global perspective, timely insights, and unique stories to a new breed of business leader who has an original vision for the future and a willingness to think differently. Founded in 1929, the magazine is a trusted market leader with a global circulation of over 980,000 each week and is available in more than 150 countries. Bloomberg Businessweek covers the business world like no one else can by drawing on more than 2,400 journalists in 150 bureaus across 73 countries. The award-winning Bloomberg Businessweek+ app is available on the iPad, iPhone, iPod touch, and Samsung devices.