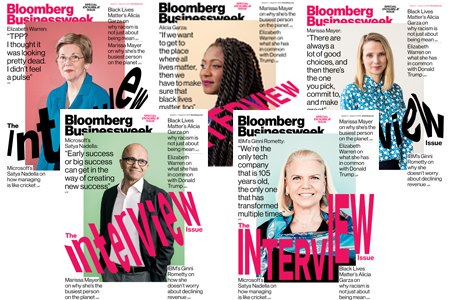 NEW YORK (Thursday, August 4, 2016)— Today, Bloomberg Businessweek released the Interview Issue, a special double-issue featuring original interviews with more than 39 leaders in business, politics, media, technology, energy, transportation, fashion, and entertainment. Icons such as Carlos Slim, Gloria Steinem, Marissa Meyer, Jeff Bewkes, Ginni Rometty, Misty Copeland, Stan Lee, Satya Nadella, Ringo Starr and many more discuss everything from their successes and stumbles, and the best and worst advice they’ve received, to how their industries are changing, and how to keep talent happy, as well as their thoughts on the upcoming U.S. presidential election.

“Our third summer Interview Issue features conversations with more than a dozen CEOs and a diverse mix of business and cultural personalities,” said Ellen Pollock, editor, Bloomberg Businessweek. “The interviews are in a Q&A format, and give readers a rare opportunity to hear from them in their own words. We think it’s a fun read, with lots of surprises–where else will you learn how Ringo Starr feels about Brexit or Carlos Slim’s views on retirement?” She added, “Only after we finished the issue did we realize that none of our five cover subjects are white men.”

The full Bloomberg Businessweek Interview Issue 2016 can be found online at Bloomberg.com/features/2016-interview-issue/

Alicia Garza, co-founder of Black Lives Matter, wants Americans to understand that racism is about much more than people being mean to each other. She also says: “The emergence of Donald Trump, and the phenomenon around him, is really a backlash against how successful this movement has been. There’s millions of people backing a fascist ideologue.”

Yahoo! CEO Marissa Mayer discusses motherhood, shareholders with competing priorities, and the struggle to make good choices great: “There was a time earlier this year when I was running the company, selling the company, bringing on six new board members, while I had infant twins, and also a husband and a 3½-year-old son. Each of those is a fulltime job.” And “There are always a lot of good choices, and then there’s the one you pick, commit to, and make great.”

Microsoft CEO Satya Nadella says he wants to turn a PC-centric company into one focused on the promise of cloud computing. “The cloud is perhaps one of the most defining democratizers because it makes it possible, both with the business model and the ability of the friction being lowered, for any small business to enter the world of digital [commerce] without the costs,” Satya told Bloomberg’s Dina Bass.

Ginni Rometty, CEO of IBM, has tried to push Big Blue onto the cloud and make its artificial intelligence, Watson, appealing to a broad range of businesses. Rometty, who is the first woman to lead century-old tech giant, said: “I wanted my tenure to be defined as being the CEO of IBM, not about being the woman CEO of IBM.”

Elizabeth Warren, U.S. senator for Massachusetts and darling of the progressives, talks to Businessweek’s Joshua Green about Donald Trump and financial reform. “I don’t see [the financial industry’s larger donations to Clinton rather than Trump] as a swing back to Democrats so much as I see it as supporting sanity,” she says. “The financial-services people, as much as many of them would like to see more deregulation, are also deeply frightened by the prospect of a Trump presidency. Nuclear war is bad for business.”

Delta Air Lines CEO Ed Bastian on remedying the carrier’s past mistakes. “I like to say we didn’t go bankrupt by making a lot of smart decisions. We made a lot of dumb decisions. We had to own it.”

TaskRabbit’s CEO Stacy Brown-Philpot discusses framing an unusually broad mission and relating to colleagues and peers when almost none of them look like you. “I was surprised by the attention and visibility on me as a black woman CEO. I look forward to the day when this is the norm and not the exception.” And she adds: “I understand what it’s like to be different and therefore can empathize with someone who’s different.”

Misty Copeland, principal dancer at American Ballet Theater: “Being a black woman, I’ve always understood that when we’re given an opportunity, we’re carrying everyone with us. That’s just how it is.”

Italian energy executive Claudio Descalzi, CEO of Eni, thinks coal use should be limited and that gas can bring Egypt and Israel together.

Luxury clothing designer Prabal Gurung talks about collaborating with mainstream retailers, “sizeism” in fashion, and why he’s not afraid to take risks.

John Krafcik, CEO of Google’s self-driving car program, discusses how Google thinks they “can keep more people safe than the way we currently get from A to B,” and why the recent Tesla crash “confirms our sense that the route to full autonomy, though much harder, is the right route.”

Demis Hassabis, CEO of Google’s artificial intelligence unit, DeepMind Technologies, talks about helping machines truly think—and who should control that critical technology if he’s successful. “It does feel like the closest thing to magic, and I think we can use it for incredible good to solve all sorts of really pressing issues that we have, from climate to healthy aging and so on,” he says. “I think ultimately the control of this technology should belong to the world, and we need to think about how that’s done.”

Tripp Keber, CEO of Dixie Brands and a pioneer in marijuana edibles, believes the cannabis industry will grow exponentially, if a Colorado initiative doesn’t get in the way. “If you don’t believe that there will be billion-dollar cannabis brands created,” he says. “I don’t think you’re looking at the tea leaves properly.”

Author Lionel Shriver‘s new novel describes a near future when the U.S. is locked out of global trade. One result: Stockbrokers turn to mugging.

Carlos Slim, Mexico’s richest man and chairman emeritus of América Móvil, discusses the role of older workers and how we may all work fewer hours in the future: “I think people should retire later, because they’ll have more knowledge and experience. And I think they should work three days a week, so that it creates space for others… The quality of life and having four days a week free would encourage a lot of economic activities— more tourism, entertainment, sports, culture, and education. People can take advantage of those extra days to keep learning.”

Former Beatles drummer Ringo Starr discusses how the band benefited from being late to digital music, the difficulty of starting a group today, and his support of Brexit. “I voted for Brexit, because I thought the European Union was a great idea, but I didn’t see it going anywhere lately,” he says. “It’s in shambles, and we’re all stuck with people who want to make arrangements for their own country and don’t think for the other countries. Britain should be out and get back on its own feet.”

Brenda Trenowden, global chair of 30% Club, on leading a campaign to increase the number of women on corporate boards.

Margrethe Vestager, European commissioner for competition, wants to keep tech giants from using their power to prevent new rivals from developing their own innovations. “There is no such thing as a free app. Obviously, you pay,” she says. “And now you pay with your data. The problem when it comes to paying with data is, it’s very hard to see what the exchange rate is.”

CEO of the accounting giant EY, Mark Weinberger, has learned a lot about how to keep millennial employees happy: purpose, engagement and flexibility.

Six people who ask questions for a living—Charlamagne Tha God, co-host of the syndicated radio show “The Breakfast Club;” Cal Fussman, writer-at-large for Esquire; Anna Sale, managing editor of WNYC radio show “Death, Sex & Money;” Ann Friedman and Aminatou Sow, co-hosts of “Call Your Girlfriend;” and memoirist Cheryl Strayed—explain how they do it.

Four groundbreakers in their respective fields—feminist and author Gloria Steinem, Broadway producer and director Harold Prince, geneticist Jim Wilson, and Marvel Entertainment’s chairman emeritus Stan Lee—discuss how much things have changed over the course of their careers.

ABOUT BLOOMBERG BUSINESSWEEK:
Bloomberg Businessweek offers a global perspective, timely insights, and unique stories to a new breed of business leader who has an original vision for the future and a willingness to think differently. Founded in 1929, the magazine is a trusted market leader with a global circulation of over 980,000 each week and is available in more than 150 countries. Bloomberg Businessweek covers the business world like no one else can by drawing on more than 2,400 journalists in 150 bureaus across 73 countries. The award-winning Bloomberg Businessweek+ app is available on the iPad, iPhone, iPod touch, and Samsung devices.