Francine Lacqua honored with Order of the Star of Italy

Francine Lacqua – Award-winning London-based co-anchor of “Bloomberg Surveillance” and anchor of “Leaders with Lacqua” – has added the Knight of the Order of the Star of Italy (Cavaliere dell’Ordine della Stella d’Italia) to her list of honors after receiving the decoration at the Italian embassy in London on Thursday May 3. 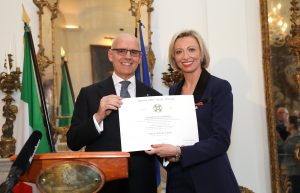 The decoration, honoring Italians living abroad who promote national prestige and co-operation with the nation, was presented by the Italian Ambassador Raffaele Trombetta on behalf of the president of Italy.

The knighthood is the latest award garnered by Francine, who won ‘International TV Personality of the Year’ at the AIB Media Awards in 2013, after being previously nominated in 2009 and 2010. In 2012, she was part of the Bloomberg team that won the OPEC award for ‘Public Interest Reporting’.

Since joining Bloomberg in 2000, Francine has covered the World Economic Forum in Davos, IMF in Washington, G20 meetings, the EU Leaders Summit and OPEC. She also led Bloomberg Television’s coverage of the Italian and French elections where she was one of the first international reporters to interview cabinet members.

In this Q&A, Francine shares how she grew her career at Bloomberg, what inspires her and tips for succeeding in the news industry.

Tell us about the Cavaliere, and why you were decorated.
Cavaliere means ‘Knight’ in Italian, and the ‘Cavaliere dell’Ordine della Stella d’Italia’ is given by the Italian Republic to Italians living abroad. Bloomberg TV is now one of the most watched English-language Television networks in Italy, and we work tirelessly to get Italian CEOs and newsmakers on the air. We are the number one destination for Italian Business wanting to talk to Investors, and we’re very proud of that achievement.

Did you have a clear career path when you embarked on your TV career?

I started at Bloomberg as a fresh-faced 22 year old intern. This year, I turn 40. Working in TV was an accident, but I’ve wanted to be a journalist from the age of seven, as my father was an Italian Foreign Correspondent. I remember my first day as a Bloomberg Intern: I had no idea what was going on, but I knew I had found my home.

How did you grow your career at Bloomberg?

I started my TV career working for the Bloomberg French TV Channel on Sunday and night shifts (1am starts), but it never bothered me too much. I managed the data screen, answered viewer’s questions, and even wrote the weather forecast! After years of writing and producing I began pitching ideas for new shows and gathering news, eventually landing a position on TV as a correspondent before becoming an anchor on TV and radio.

How has the media industry evolved throughout your career?

When I started out in the industry not many people wanted to talk about economics and business. Now, it’s central to breaking news and sets the agenda in today’s newsroom.

How has Bloomberg evolved over the past 18 years?
The company has grown a great deal and we’ve become a lot stronger as a brand. 15 years ago, it was tough getting Chief Executives to talk to us. Now, most of them only want to speak to Bloomberg TV.

Tell us about a key milestone you’ve been involved in during your TV career at Bloomberg.

Moving into our new London broadcasting studio in November was a big deal for us. We spent months preparing and rehearsing after our live shows in the old building. We had a lot to work through, including developing a new look and graphics; the result is a more streamlined operation with an easier and more engaging way of telling our stories.

What do you find inspiring about your current role?

I love what I do, and I love my team. Speaking to producers, newsmakers and the crew about how to make the best possible show is the best part of my day. The newsroom is lucky to have a front-row seat to observe the making of history. What I don’t love is dealing with late TV guests that mess up our news rundown!

Any advice for people looking to develop a career in the TV/ news industry?

Work hard, and develop a solid understanding of the links between the economy and politics. Strengthen your story-telling abilities, and when you’ve mastered that, work even harder. I have long days and travel a lot, but enjoy every second of it (most of the time!).

If you could invite anyone to lunch, who would they be?

Henry Kissinger or the Queen of England – they’ve both seen so much and met so many world leaders. I would have so many questions, it would have to be a long lunch.